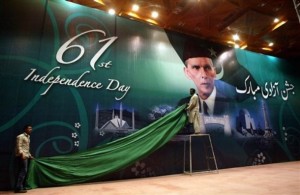 Pakistani workers fix a cloth over a billboard showing the portrait of founder of Pakistan, Mohammed Ali Jinnah in preparation for the upcoming Independence Day ceremony, Saturday, Aug. 11, 2007 in Islamabad, Pakistan. Pakistani nation will celebrate its Independence Day on Aug. 14, to mark its independence from the British rule in 1947. The word on the board at right reads ��Happy Impendence Day.’ (AP Photo/Anjum Naveed)