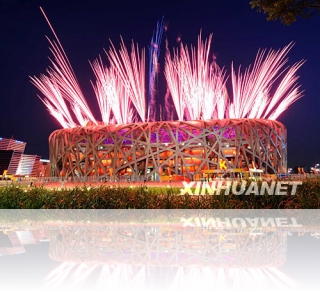 China has opened the Beijing Olympics with a burst of fireworks at a spectacular ceremony that celebrated ancient Chinese history and aimed to draw a line under months of political controversy. An army of 2,008 drummers pounded out the countdown to the games, in a display that gave China an opportunity to show off its economic might, but also galvanised critics of the communist government’s human rights record.

Hu Jintao, the Chinese president, declared the Games open. Jacques Rogge, head of the International Olympic Committee (IOC), said: “For a long time, China has dreamed of opening its doors and inviting the world’s athletes to Beijing for the Olympic Games. “Tonight that dream comes true. Congratulations, Beijing!”