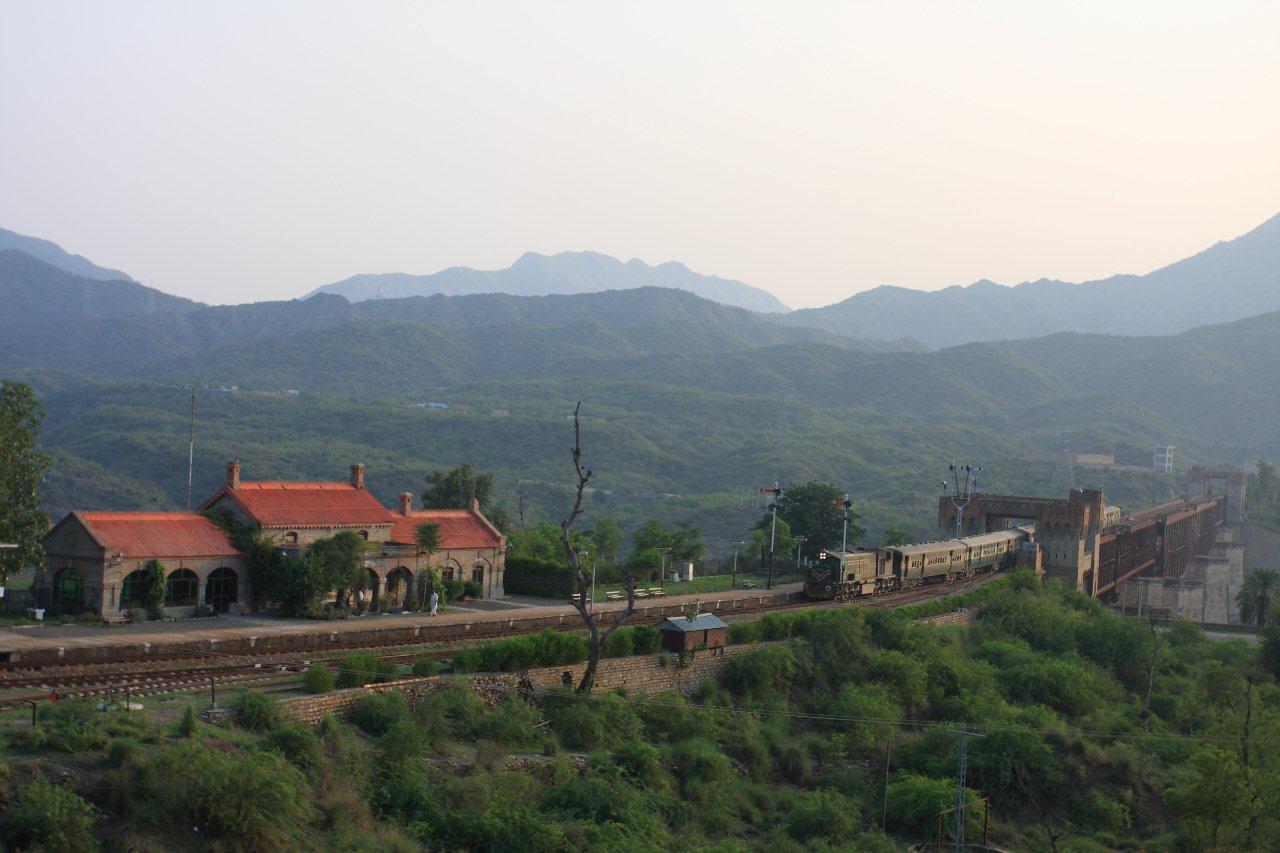 Railways is among the more enduring legacies of the British Raj in the subcontinent. There is virtually an inexhaustible body of extremely interesting lore and history of the building of this great system of transportation discussed in a few excellent books and in the esoteric journals in the Punjab Archives. It is another story that the ignorant and asinine bureaucrats do not permit access to that great treasure trove.

Even if one has not read about the intricacies and heroism of the laying of the line from, say, Ruk (near Shikarpur) to Sibi, one can still stand on the platform of Ruk and wonder what the letters KSR and IVSR that adorn the façade in blue on white ceramic tiles mean. The lettering signifies that this little-known station was the junction of the Indus Valley State Railway coming up from Kotri and the new line to Quetta and Chaman called the Kandahar State Railway.

As railway stations go, the all-time favourite for anyone should really be the quaintly turreted, mud-plastered station of Kan Mehtarzai. Sitting at 2,224 metres above the sea, on the narrow-gauge Zhob Valley Railway (ZVR) between Bostan and Zhob, this was the highest train station in Pakistan. Once railwaymen told hair-raising tales of those lovely toy trains becoming snow-bound in winter. There were particularly hairy stories of the blizzards during the 1970s and one can imagine how anxiety making a journey on ZVR could be.

After this service was suspended in 1986, Kan Mehtarzai was forgotten. For many years, the line and other bits of infrastructure remained in place, but in 2008, all steel fittings were auctioned and removed. This is Pakistan Railways’ highest line in terms of height about sea level and surely there is some merit in revitalising it at least from Bostan as far as Kan Mehtarzai.

In Balochistan, too, there is what its builders labelled ‘The Lonely Line’. This is the line that travellers ride on their way to Iran. It was lonely because back in 1916 when they first started to lay it, they would go a hundred and fifty kilometres between villages. The sand and gravel desert that the line wended its way was littered with the bleached bones of camels and horses.

Today, as one rides the irregular service or drives on the highway parallel to the line, one passes by deserted and ruined railway stations that are already being overtaken by the desert that had once made way for them.

On the subject of the attraction of railway stations, one simply cannot neglect Attock Khurd. A little doll’s house of a building with a pitched red roof and sitting under the crenulated turrets of the magnificent Attock Bridge, it belongs to a film set. Without doubt this is the most picturesque railway station in the entire country. If Pakistan Railways has been neglectful of its heritage on the whole, it has redeemed itself by turning Attock into a tourist destination.

Station buildings are not the only railway attraction, however. There are some magnificent bridges to be seen as well. My favourite is the remains of the Princess Louise Margaret Bridge in the Chhappar Rift, north of Sibi, in Balochistan. This line remained operational only for some six decades and was dismantled in the summer of 1942. But when it ran, it was the first connection between the Sindh plains and Quetta in the hills. The line through the Bolan Pass came four decades after its launch.

Then there are the very picturesque spans of line from Attock to Daudkhel. Though they all merit a visit, the winner among them is the superlative piece of construction across the Soan River. If the Louise Margaret bridge was once the highest in Pakistan (65 metres above the riverbed), the Soan Bridge now holds the honour.

Of bridges there is no death, however. The little known Victoria Bridge across Jhelum on the line from Malakwal to Gharibwal and Khewra is a treat for the ordinary tourist as well as the students of architecture. It is no exaggeration that its handsome criss-cross of red girders forming the flat arch above and the parallel lines below make a fantastic study of shapes for the artist and photographer. One thing that we can be eternally thankful to railway managers for is the rehabilitation of Golra station and its conversion into a railway heritage museum. Lying just outside Islamabad, it is within easy reach of all. Within its walls it preserves an array of railway memorabilia ranging from crockery to signalling equipment and clocks to ceiling fans, platform furniture and other equipment. On the platform outside sits a metre gauge carriage that was once the private saloon of the Maharana of Jodhpur.

Author: Fellow of Royal Geographical Society, Salman Rashid is author of nine travel books – all books are available at Sang e Meel (042-3722-0100), Lahore]. He is the only Pakistani to have seen the North Face of K-2 and trekked in the shadow of this great mountain. His work – explorations, history, travels – appears in almost all leading publications and on this blog.